The Jonathan Dunham House was considered “the finest house in the settlement” of Woodbridge, according to a 1921 history of Middlesex County, New Jersey, where the township is located. Yet the two-story house was relatively modest by today’s standards, at least inside.

Only two rooms, a living room and dining room, were on the first floor. Meals were prepared behind the house in a framed lean-to kitchen. There were two bedrooms on the second floor and an unfinished basement below the house.

On the outside, the house was a product of its time. The exterior walls were made of brick, long believed to have been imported from the Netherlands and used as ships’ ballast.  The bricks were arranged in a featured Flemish checker bond pattern, mixing red and black. The west side face featured a double diamond, which may have been a signature of the builder. 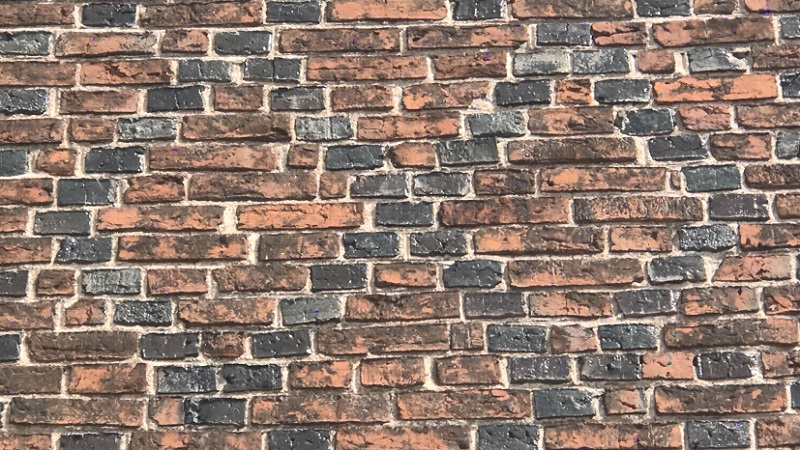 The sourcing of the bricks was disputed in a 2019 report, compiled in connection with an archaeological dig, which concluded that they were almost certainly produced locally. The report said: “The attribution of bricks used in early brick buildings in New Jersey to Holland is a common, though erroneous, supposition.”

In any case, the style of brickwork helped researchers who worked on the house’s nomination to the National Register of Historic Places estimate the construction date. While many historians had contended the work was done around 1670, when Jonathan built his grist mill, the researchers concluded that the date was “highly improbable.”

Instead, the house’s form, materials and workmanship suggested the work was done c. 1717. The nomination cited a letter written by the Rev. Thomas Halliday, who conducted services in Woodbridge, on Aug. 1, 1718, and referred to in the Rev. Joseph W. Dally’s 1873 history of the township. Halliday wrote about “considerable improvements” in the Kirk Green area, including “new brick buildings.” In Dally’s view, the Jonathan Dunham House was probably among them — and the researchers agreed.

An earlier time frame emerged from research done in connection with the archaeological dig. Tree-ring dating of the house’s first-floor joists indicated the floor was built in spring 1709. The research also found that Jonathan had died before then and concluded that the house was built by his son Benjamin, who had inherited the land on which it stood after his father’s passing.

Benjamin Dunham died in 1715. His widow, Mary, maintained ownership of the house until 1727. She sold the property to John Van Horne, a wealthy New York City merchant, for 250 pounds. While the deed makes no mention of a brick dwelling, the sale price suggested the land had been improved. Van Horne was the owner until his death in 1735.

By the 1750s, the house was the residence of Samuel Barron, another early settler of Woodbridge. His family name lives on today in the Woodbridge school system, whose sports teams are called the Barrons, and at the Barron Arts Center, a cultural institution that previously was the township library.

Barron probably bought the house in the 1750s as well, though no historical record of the purchase exists. He died in 1801 and left the property to his son John. One of John’s sons, John E., took over control in 1839. John E. died in 1848 and the house went to John’s other son, Samuel.

Samuel Barron’s heirs made a deal to sell the house in 1872. The ownership change would give the Jonathan Dunham House a new life, as well as a new look.